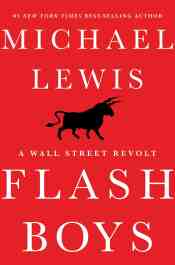 too . Well moving back to the topic : Flash Boys: A Wall Street Revolt is a new book by Michael Lewis to be released today. I have been following Mr Lewis when I first read his best work in “Liar’s Poker” .  I have read almost all his books published in the past and found every time fresh things to explore in this financial jungle.

He appeared for an interview day before yesterday before the release of Flash Boys,” is scheduled to be released on Monday, appeared on “60 Minutes”  to argue that high-speed trading has ripped off investors not in possession of lightning-fast computers and special cables.

Flash Boys is about a small group of Wall Street guys who figure out that the U.S. stock market has been rigged for the benefit of insiders and that, post–financial crisis, the markets have become not more free but less, and more controlled by the big Wall Street banks. Working at different firms, they come to this realization separately; but after they discover one another, the flash boys band together and set out to reform the financial markets. This they do by creating an exchange in which high-frequency trading—source of the most intractable problems—will have no advantage whatsoever.

The characters in Flash Boys are fabulous, each completely different from what you think of when you think “Wall Street guy.” Several have walked away from jobs in the financial sector that paid them millions of dollars a year. From their new vantage point they investigate the big banks, the world’s stock exchanges, and high-frequency trading firms as they have never been investigated, and expose the many strange new ways that Wall Street generates profits.

I am not a very keen observer or follower of the high frequency trading, but if you have links in the market its better to be a jack of all rather narrowing your horizons.